Cheney opened the 2019 football season at Garden Plain High School Friday. The Cardinals first half was epitomized by their first offensive play when they lost the ball on an errant exchange on a reverse. That would be the first of 4 turnovers in the first half for the Cardinals. Garden Plain took over the ball and drove 31 yards for the first score. On the Cardinals next possession, they ran three plays and punted, followed by 3 possessions that ended in 2 interceptions and a fumble respectively. Garden Plain turned 3 of the 4 Cardinal turnovers into touchdowns and took a 28-0 lead into halftime.

In the second half, Cheney looked like a better team. The third quarter proved to be a good battle as neither team scored. Then Cheney was able to get on the board after a 12 play 80 yard drive ended with QB Zac Block running 13 yards for the score. After a failed onside, Garden Plain answered in 1 play with a 49 yard run. Cheney finished the scoring with 6 play 40 yard and 12 play 75 yard scoring drives.

Cheney outgained the Owls in total offense with 294 to 281, first downs, and time of possession. Despite the loss, the Cardinals had many positives to come away with from the game and will look to build on those as they head into their next game against Conway Springs. 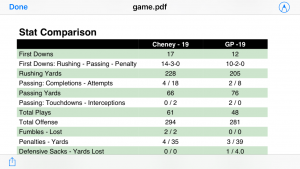